Professional ballchasers, We Aight, The Backflip Boys and Spectre all advanced to LAN finals. Week 6 was filled with an incredible amount of shots and goals scored. 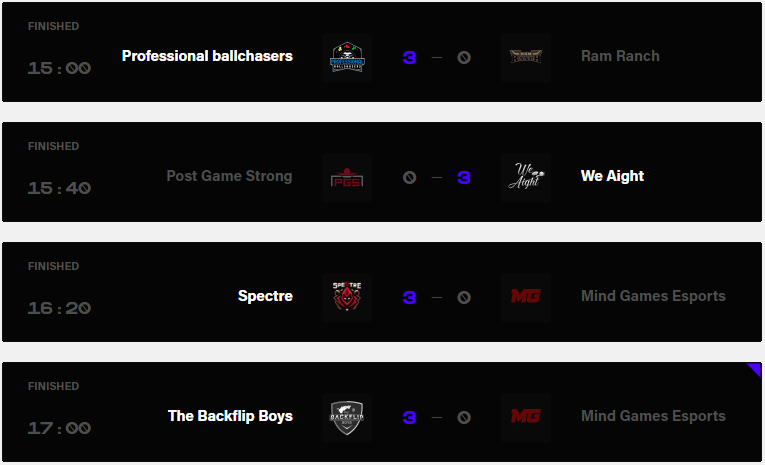 At this point everyone knew the outcome of this match but to everyone’s surprise it was Ram Ranch who scored the first goal in game 1. Though, this lead didn’t last for too long as PBC tied up the game fairly quickly after which pure annihilation started. Pro ballchasers increased their pace which Ram Ranch just couldn’t keep up with at all. PBC started to score goal after goal conceding only 1 more goal to Ram Ranch. In total, PBC scored 11 goals with 5 of them being scored in the last 50 seconds of the game.

This unstoppable locomotive under the name of Professional ballchasers continued their way to the victory in game 3 by scoring 4 goals within the first minute. At this point Ram Ranch’s chances to get anything from this match were extremely slim to none. Eventually Professional ballchasers finished game 3 with a score of 8:1 and won the series 3:0.

Similarly to the previous matchup, the outcome for this match was also pretty much known and, oh boy, was the action delivered. We Aight showed no mercy whatsoever to Post Game Strong. We Aight completely crushed their opponents by scoring 10 unanswered goals and making a new league’s highest goal difference in one game record.

This scoring machine under the name We Aight did not want to stop. They continued to push their limits with the intention to score even more goals. They were hungry for more shots, for more goals, which lead them to make more mistakes in defense which eventually allowed Post Game Strong to score their first goals of the series. But PGS couldn’t keep up with this aggression from We Aight. Game 2 ended with the score of 10:2 for We Aight.

Those 2 goals that PGS scored in game 2 were unfortunately the last ones that they scored in the series. We Aight did not intend to stop in game 3. They wanted to get another 10 goals on their name to reach 30 goals in total across the series. But PGS didn’t allow them to do so. Though, it didn’t stop We Aight to stomp their opponents. Game 3 ended with 7:0 on the scoreboard for We Aight.

For the third week in a row miško got substituted by Krisic who, to be fair, turned out to be the main powerhouse of Spectre. And Krisic proved himself once again this week, by getting a hat-trick in game 1 and helping his team win the first game 6:0 over Mind Game Esports.

Spectre continued their dominance in game 2 as they scored 3 goals in the first half of the game when MG Esports managed to score and make it a 2 goal game. Unfortunately for Mind Games, they weren’t able to catch Spectre and the game ended with 4:2 on the scoreboard. Spectre took the 2:0 lead in the series.

Now it was time for MG Esports to either take it or leave it. They had to win in order to stay alive in this series. They started off with a promising early goal from Pumpkindigger got a lead for the very first time in the series. This lead was interrupted by somicV2 as he tied up the game after nearly 2 and a half minutes. And that’s when Spectre started to pop off again. They scored 3 more consecutive goals and conceded 1 more goal and finished the game with the same score as previous game - 4:2.

In order to secure a spot in the LAN finals, The Backflip Boys had to win with a score 3:1 or better in the series. MG Esports, even though defeated from the last match, but still warmed up, were ready to show the class. Early in the game 1 both teams exchanged some goals. Within the next minute MG Esports took the lead 2:1 thinking that winning this match is totally doable. But once again, unfortunately for MG Esports, their opponents started to score goal after goal until the game ended with the score 6:2 for The Backflip Boys.

Game 2 on the other hand was a complete nerve tickling experience for both teams as the game went to overtime. In this game we didn’t see as many goals as in the previous games but that didn’t make it less exciting. In fact, before the timer hit the zero mark and the game went to overtime, nobody scored. Both teams battled their way to overtime without any success whatsoever. But yet again, Mind Games let the opportunity to win a game slip by them as it took only 19 seconds for GARSHO to score a goal and double the lead in the series to 2:0.

Game 3 was in many ways similar to game 2, except that it didn’t go to overtime. During game 3 also only 1 goal was scored, there was similar amount of shots on goal, and at the end of the day - the same winner. Sariuss managed to snag one goal for TBB in mid-game which was never answered by Mind Games Esports. The Backflip Boys won the game 1:0 and won the series with final result 3:0 finishing this week with another sweep.

Professional ballchasers and We Aight are still undefeated after 5 matches in 6 weeks and they secured themselves a spot in the LAN finals. The Backflip Boys and Spectre after this week’s sweeps also secured a spot in the LAN finals with leaving no chance for Scavenge Esports to catch them. After Week 6, current league standings are looking as follows: 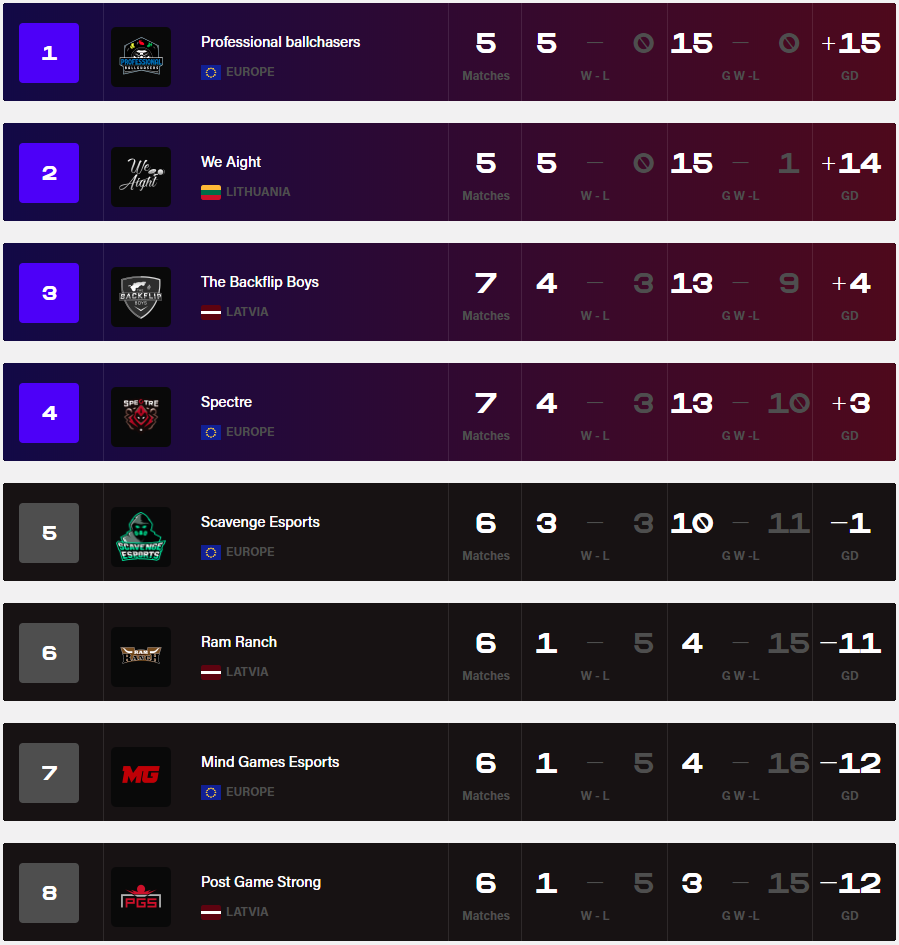 BESL Pro Season 3 is a 7 week battle between the eight best Rocket League teams from the Baltic states for their share of the €2,000 prize pool and the chance to acquire themselves one of the four spots at this season’s LAN finals held in Riga, Latvia at Kipsala exhibition center with the event itself taking place on 2nd of June.

Be sure to follow our social media and streaming platform channels in order to not miss any Rocket League action in the future:

Schedule For Week 7 and Match of the Week Revealed