The second qualifier of BESL Pro Season 4 has officially concluded which determined the last 2 teams that completed the list of participants for the upcoming season. And the list looks as follows:

In the first qualifier 4 teams tried to prove which of them are the best: 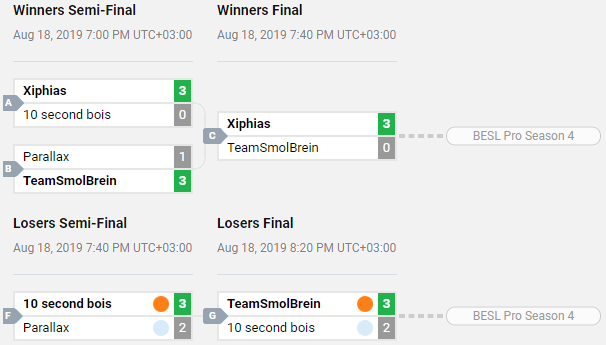 The first qualifier for team Xiphias was a breeze. They ended up winning in two quick 3-0 bo5 series and qualified for the upcoming season (after qualifying they renamed their team to Imperial). Their opponents, 10 second bois, dropped to the lower bracket where they ended up playing against Parallax which lost their match against TeamSmolBrein. 10 second bois almost got reverse swept by Parallax, but thankfully for them they got themselves together and won game 5 with a close score of 3-2. In the lower bracket finals, 10 second bois faced against TeamSmolBrein. After winning the first 2 games it all went downhill for 10 second bois. This time around they didn’t manage to get that third win and got reverse swept by TeamSmolBrein which ended up winning the series 3-2 and qualifying for the upcoming BESL season.

In the second qualifier 5 teams tried to prove themselves worthy playing in the upcoming BESL Pro Season 4. And Mind Games Esports proved themselves worthy. After being relegated from last season and not being able to play in the first qualifier, they came back stronger than ever with a new roster and qualified for the upcoming season. 10 second bois almost got swept by newcomers that named themselves Team Shattered but during game 3 everything turned upside down and 10 second bois ended up reverse sweeping their opponents. But later on 10 second bois got sent to lower bracket after losing to Mind Games Esports. Meanwhile, after losing their first game, Bad Dudes continued fighting for their spot in the league in the lower bracket where they won everyone with ease. In the lower bracket finals Bad Dudes faced against 10 second bois who tried to qualify for the season for the second time. Bad Dudes ended up winning 10 second bois 3-0 in the series and earning themselves that last spot in the league.