The final week of BESL Pro Season 4 has officially finished with Bad Dudes overtaking 4th place from Imperial as well as TeamSmolBrein and Post Game Strong being relegated.

Kicking off week 7 of BESL, Bad Dudes begin their journey to end it with a bang, taking the first game 1:0 to their favor, maintaining consistent and strong pressure on Imperial. Maintaining their momentum, Bad Dudes manage to carry the second game into overtime, during which they hit Imperial like a train, shot after shot, putting in so much pressure that Imperial eventually cracked and the win went to Bad Dudes 2:1. Game 3 would go down in history as one of the most unfortunate ones for Imperial. Bad Dudes take that game 2:1 to Doovy’s very unfortunate own goal at the last minute of the game, giving the victory in the series to Bad Dudes with scores 1:0; 2:1; 2:1.

KK’s soft touch to get a nice angle

Starting off the second half of the week, Team Black Diamond open up with an absolute steamroll of a game, constantly capitalizing on the massive pool of mistakes TeamSmolBrein were making, finishing the game 8:0. Game 2 was far more orthodox, with a lot less mistakes on the side of TeamSmolBrein, however this change of pace was still not enough to beat Team Black Diamond, who took the second game 3:1. Game three and four, however, TeamSmolBrein’s substitute player Freecant decided he will no longer stand for this bullying and went into overdrive, absolutely thrashing around Team Black Diamond and denying an insane amount of their opportunities. The fruits of his labor shine throughout these two games, getting TeamSmolBrein to victory in both of them, bringing the series to a game 5. With the stakes high and the series at its end, TeamSmolBrein actually get 3 goals ahead very early. This, however, does not last long, as Team Black Diamond bring it all back, and Frosty scores a glorious buzzer beater to stop the reverse sweep in its tracks. Thus, the series comes to an end, with a victory for Team Black Diamond with scores 8:0; 3:1; 1:2; 2:3; 4:3.

The final match of BESL Season 7 kicks off with Timechasers once again showing their strength, attacking The Backflip Boys with all they have, taking the first game 7:3. They carry this momentum into game 2 as well, overshadowing The Backflip Boys’  fabled defense with pure, uncensored pressure, winning the second match 4:1. However, every snowball stops rolling at some point, and game 3 was the turning point for The Backflip Boys, which they took the victory in overtime with a score of 4:5. In game 4, Timechasers have taken upon a different tactic - Mimfipy and whynOtparty have picked up the Scarab cars. This, however, proved unsuccessful, as The Backflip Boys seemingly had an easier time, being able to take yet another win with a score of 0:2. In game 5, we no longer see the Scarab tactic from Timechasers, and this has proven to be the correct choice for the favorites this week as they have won the final game and ended the series with a victory with scores 7:3; 4:1; 4:5; 0:2; 4:1.

Trex dunks it in

After the final week of the regular season the standings table looks as follows: 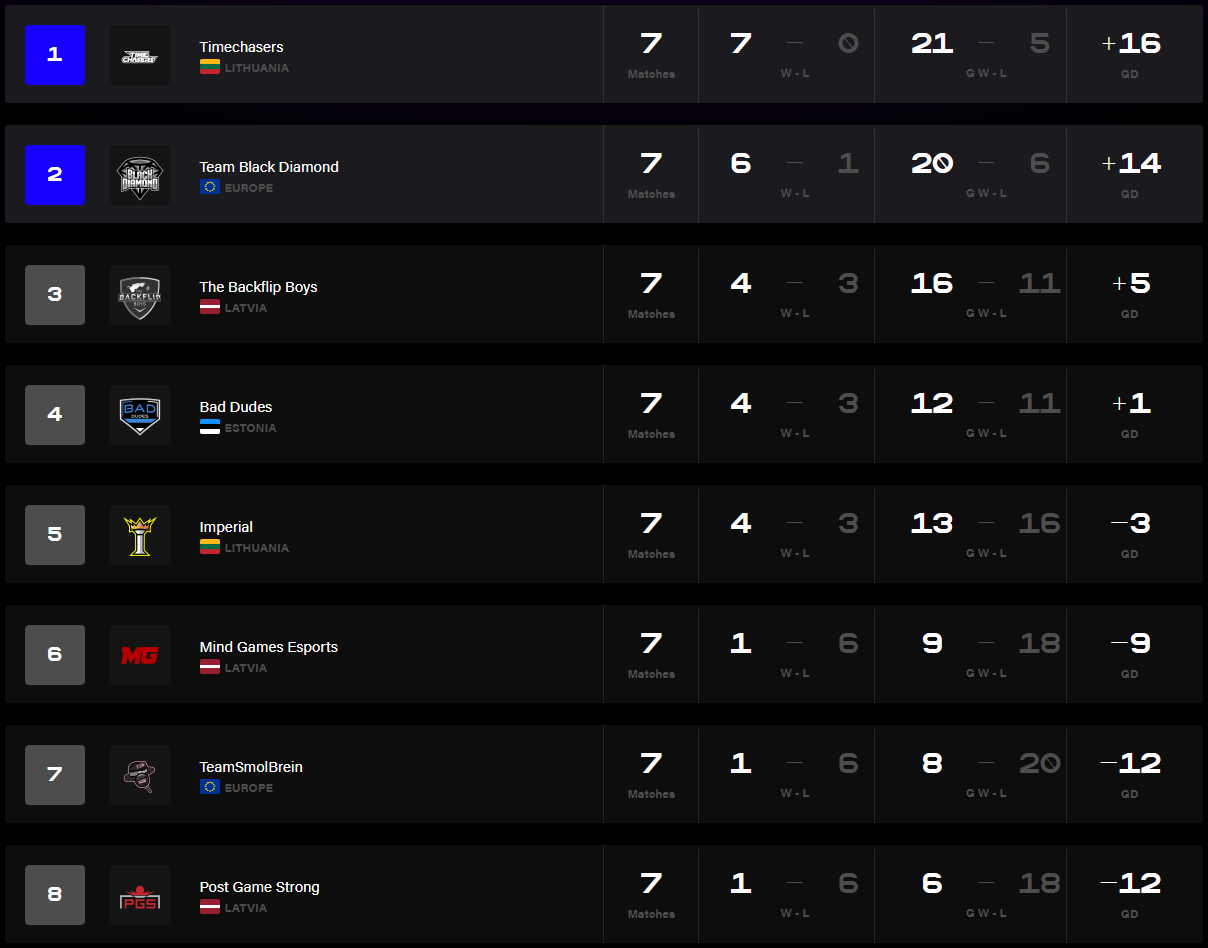 Be sure to follow our social media and stream platform channels in order to not miss any Rocket League action in the future:

BESL Pro Season 4 is a 7 week battle between the eight best Rocket League teams from Baltic states for their share of the €2,000 prize pool and the chance to acquire themselves one of the two spots at this season’s LAN finals held in Tallinn, Estonia at Saku Suurhall with the event itself taking place on the 23rd of November.

A look at the finalist: Team Black Diamond