Scavenge Esports upsets The Backflip Boys and continue to fight for the LAN spot. Ram Ranch gets their first win by upsetting PGS. Professional ballchasers continue to dominate the league without dropping a single game. 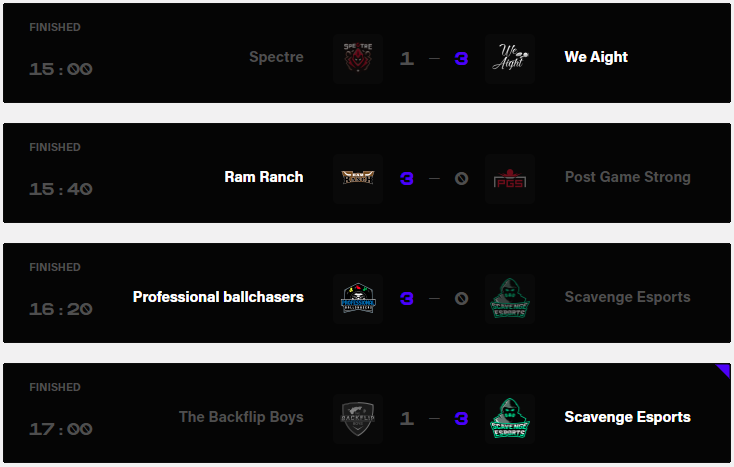 First game of the series started with a quick lead from We Aight as only within 6 seconds after the first kickoff Ciuvas was given plenty of open space to dribble the ball and he popped it up hitting the crossbar, letting Mimfipy finish the job. Later in the game We Aight doubled their lead over Spectre and eventually won the game with a score of 2:0 without letting their opponents score even once.

At the start of game 2 We Aight seemingly played in a more conservative way by being more defensive and respecting their opponents. This eventually lead to pressure from Spectre and We Aight couldn’t handle it. Primea went full force from the corner of the field, passing by Ciuvas and Mimfipy who was staying in the goal too far from the near post. As a result Primea took this opportunity and scored his first goal of the series taking a 1:0 lead for Spectre. We Aight understood that it’s not how they should play against them. They started to show more aggressive playstyle by shooting a lot more towards the Spectre’s net. As a result it ended up with 3 unanswered goals from We Aight, winning the game 3:1 and leading 2:0 in the series.

In game 3 We Aight continued their offensive pressure by beating the fastest goal scored record within this series. This time it took only 5 seconds for Spring to open up the scoreboard after a wonderful centering pass from Ciuvas. But shortly after that Spectre answered with 2 goals, gaining a 2:1 lead. We Aight didn’t let themselves down and eventually tied up the game, making it 2:2 for a short while. Later in the game We Aight made a few crucial mistakes in defense and Spectre used these opportunities to capitalize on them by scoring 2 goals, ending game 3 with a victory over We Aight with 4:2 on the scoreboard.

Ciuvas started We Aight’s run of revenge in game 4 by scoring 2 early goals for his team and putting a lot of stress on Spectre. After the win in the previous game Spectre realized that their opponents are vulnerable and that they actually can take another win from them. Following this mentality they managed to score one goal back but it was answered once again by We Aight as Mimfipy put the ball in the back of the net making it a 3:1 lead for We Aight. As much as Spectre tried to tie up the game, they just couldn’t find a way to do it. Both teams exchanged goals once again and eventually the game ended as We Aight prevailed over Spectre 4:2 in game 4 and 3:1 in the series.

Even though this match wasn’t voted as the match of the week, it definitely was just that in the hearts of many people in the community. Post Game Strong had to win this match if they were hoping for any chance to get to LAN finals. First game of the match was pretty intense as both teams exchanged with some goals and eventually went to overtime with 2:2 on the scoreboard. After playing ping pong for over 3 minutes the golden goal was scored by Grumpy, winning the first game for Ram Ranch since the first week with a  final score of 3:2.

Game 2 was as intense as the first one but with less goals scored. Same as previous game, both teams paid a lot of attention to defense, not allowing opponents to score. It was already more than half of the game played when the first goal was scored by Airi, taking a 1:0 lead for Ram Ranch. After that teams continued to apply pressure on each other without any success until the very end of the game when Grumpy managed to sneak one goal in thus doubling the lead for Ram Ranch and ending the game with a shutout over PGS with 2:0 in game 2 as well as in the series.

As game 3 started, Ram Ranch saw the light at the end of the tunnel. They finally were on the right track to gain their first victory. This definitely boosted their confidence as they scored 2 goals within the first minute of the game. Post Game Strong started making silly mistakes on defense and Ram Ranch capitalized on almost every single one of them. By the halftime of the game the score was already 5:0 for Ram Ranch and everyone could see PGS’s morale getting crushed. Even though PGS revenged 2 goals for themselves, unfortunately, it wasn’t enough, especially after Grumpy scored one final goal for Ram Ranch, ending it with a score of 6:2.

Up until the start of this match Professional ballchasers were the only team that hadn’t lost a single game so far. At this point they already knew that if they won Scavenge Esports by clean sweeping them, they’d get 1st place in the standings after this week because of a higher game differential compared to We Aight. This match was also crucial to Scavenge Esports because they still have a chance to get to LAN finals and they need get those wins no matter what. During game 1 both teams showed each other what they are capable of but defense on both sides was fantastic. Until the very end of the game nobody scored, timer hit the zero mark and it still was 0:0 on the scoreboard. In OT it took just over 1 minute for PBC to score. KK with an amazing demo in the midfield destroyed the defense of Scavenge Esports, received a pass from whynOtparty and scored an easy goal in the open net.

Game 2 started with this disgusting (in a good way) goal by Phoenix. The more PBC played against Scavenge Esports the more they got used to their playstyle which allowed them to adjust their own pace of the game. During the first minute of the game, 4 goals were scored in total - 3 of them by Professional ballchasers and 1 by Scavenge Esports. Then for nearly 3 minutes there was a goal drought and later both teams started to bombard each other with goals again. In the end, the game ended 5:2 for PBC and they doubled their lead in the series 2:0.

Professional ballchasers continued to play at their own pace which Scavenge Esports couldn’t keep up with. With barely over a halftime mark PBC were already leading 4:0 in game 3, showing outstanding plays both in offense and defense. PBC ended up scoring another goal towards the end of the game, finishing the match with 5:0 on the scoreboard for game 3 and 3:0 in the series.

After a hard fought battle against PBC, Scavenge Esports had to refresh themselves for this final match of the week. This match was also incredibly important for them to win. Winning this would mean that they are still up there trying to show everyone that they are fighters. The Backflip Boys started out game 1 really strong by scoring 2 goals in 40 seconds and trying to get into the heads of players of Scavenge Esports to get their morale down. But Scavenge Esports weren’t giving up at all. They answered back with some goals and eventually tied up the game 3:3 and as a result first game went to the overtime. Overtime didn’t last too long, as at some point Ragiss missed a crucial clear, which allowed Sariuss to score 4th goal for The Backflip Boys thus taking a 1:0 lead in the series.

Scavenge Esports realized that this match is totally winnable for them and started game 2 more confidently. Despite that, TBB’s defense was on par with Scavenge’s offense. Both teams showed some really good performance. As game was coming closer and closer to the end with The Backflip Boys leading 2:1, Frosty managed to tie up the game with a few seconds left on the clock and eventually the game went to overtime second time in a row. Though, this time it was Scavenge Esports who prevailed, ending the game with 3:2 on the scoreboard and tying up the series 1:1.

There were a lot of shots from both teams during game 3 but only 1 goal was scored early in the game after Kio made a shot towards TBB’s net but the ball hit the far post, after which, luckily for Scavenge, it got redirected back into the goal after an unsuccessful defensive play from Sariuss. Scavenge Esports won their second game in a row taking the lead in the series 2:1.

Similar scenario happened during game 4, though, there weren’t that many shots from TBB this time. In game 4 TBB struggled to get the ball to opponent’s net to make any dangerous moments and scoring opportunities. Scavenge Esports, on the other hand, had yet another fantastic game where they simply bombarded their opponents with shots. In total, Scavenge Esports players made 13 shots and TBB only 2. As a result, Scavenge Esports won their 3rd game in a row thus winning the series 3:1.

With this week’s clean sweep Professional ballchasers guaranteed themselves a 1st place in the standings after week 5 as they now have higher game differential than We Aight. Also, 3 teams currently have 3-3 W/L record which means that every game is at high stake right now. After Week 5, current league standings are looking as follows: 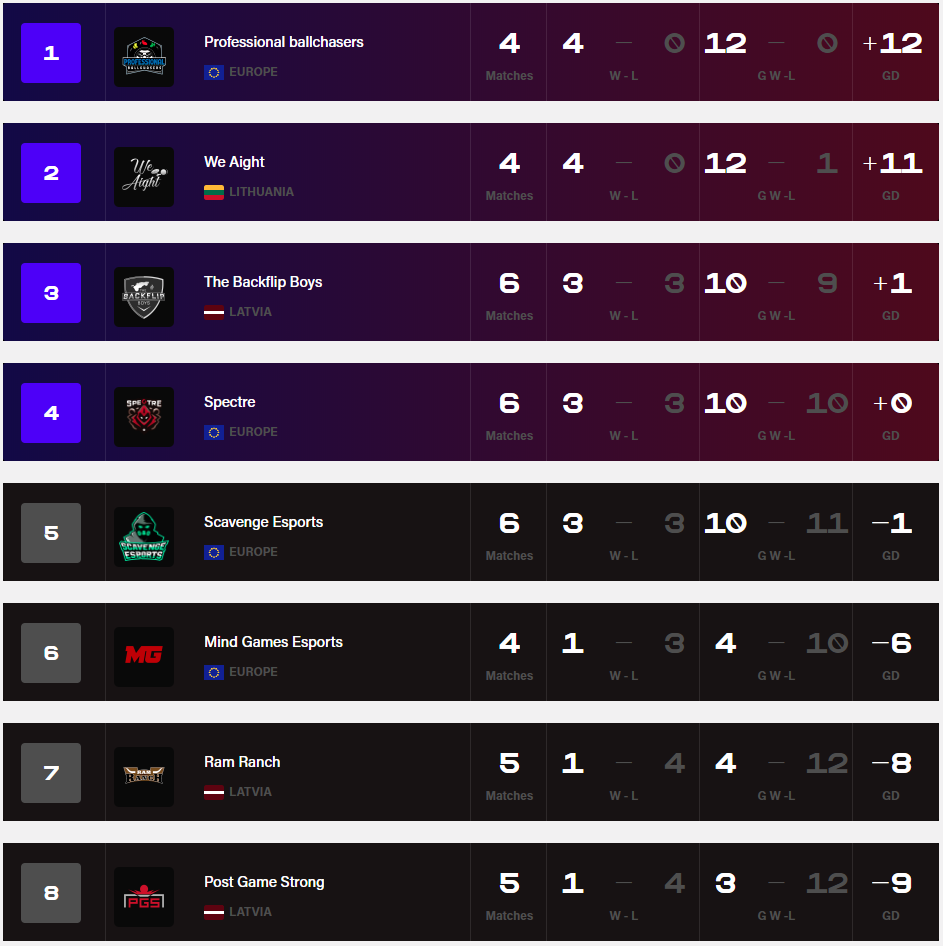 BESL Pro Season 3 is a 7 week battle between the eight best Rocket League teams from the Baltic states for their share of the €2,000 prize pool and the chance to acquire themselves one of the four spots at this season’s LAN finals held in Riga, Latvia at Kipsala exhibition center with the event itself taking place on 2nd of June.

Be sure to follow our social media and streaming platform channels in order to not miss any Rocket League action in the future:

Schedule For Week 6 and Match of the Week Revealed